Interview with Katya García-Antón, the new director at Nordnorsk Kunstmuseum in Tromsø.

During the past couple of years, storms have been raging at Nordnorsk Kunstmuseum in Tromsø. After the shocking departure of former director Jérémie McGowan in April 2020, many were curious about who would be appointed the role of leader of the only art museum in Northern Norway.

On global resonance and new connections

In April 2021 Katya García-Antón, former director of the Office of Contemporary Art (OCA), was appointed as the new director and chief curator to lead the institution for the next four years. Her first day at work in the Arctic capital was the 1st of August this year. Se Kunst Magasin asks what her thoughts and ideas are for Nordnorsk Kunstmuseum in the forthcoming future, and the road ahead.

Could you tell us a little bit about yourself and your background?

I am binational, part British part Spanish. I was born in London but grew up in Spain. I trained as a biologist, with a specialization in primatology and ecology. After getting my bachelor’s degree, and two years in the field researching (in the Amazon and Sierra Leone), I decided to transition into the arts.

I took an MA at The Courtauld Institute of Arts London on 19th and 20th-century art, specializing in art and politics in 20th-century Spain, and from there my life in the arts took off. I worked as an art critic for BBC World radio broadcasting for Latin America, then I worked at the Museo Nacional Reina Sofia in Madrid, the Institute of Contemporary Arts London, the IKON Birmingham, and the Centre for Contemporary Art Geneva.

Throughout this I also took on various parallel projects, curating the Spanish Pavilion in the Sao Paolo Biennial (2005) and the Venice Biennial (2011), then the first edition of the Qalandiya International Biennial, Jerusalem/Ramallah (2012). Later, I launched the critical writing program for the Arts Council Switzerland and the Dhaka Art Summit, and curated shows for various international institutions like the Museum of Modern Art Sao Paolo.

I arrived in Norway in 2014, as director of the Office for Contemporary Art Norway (OCA), and completed the two terms of the contract there earlier this year. Coming to Norway allowed me, for the first time, to seriously consider how my background as a scientist could interact with my training as an art historian.

In Norway land, water, plants, and animals are so very present in everyone’s life. There is a real possibility for artists and thinkers to reflect on the relationship of humans to their living and other neighbors. Connecting with Northern Norway (which was also a bid to decentralize OCA´s activities) and with Sámi perspectives became central to my leadership of OCA and the work the team and I did there, responding to the urgent need to decolonize institutional practice and centre Indigenous ways. I did long-term critical writing projects and made platforms for the various artistic stories from this part of the world to be better known and build their influence internationally.

The international impact generated by “Thinking at the Edge of the World” (2016) in Longyearbyen, Svalbard, laid strong foundations that were deepened through a series of research and exhibitions programs (NOTE 1). All of which ultimately facilitated the invitation of nine Sámi artists to the world-renowned Documenta 14 quinquennial in Kassel (2017). In addition, bringing the International Curators Congress (IKT) to Oslo and Tromsø (2016), the research exhibition “Let the River Flow”, projects in Máze, and others all nourished the research that led to the international acclaim received by the trilogy of publications on Indigenous thinking (2017-2020).

The success of The Sámi Pavilion in this year´s Venice Biennial, has all been highlights in its focus to decolonize and Indigenise, as well as strengthening the influence and opportunities internationally for Norway and Sápmi.


Katya García-Antón at the opening of The Sámi Pavillion at the 59th International Art Exhibition of La Biennale di Venezia in 2022. Photo: Michael Miller / OCA

What are your plans and visions for Nordnorsk Kunstmuseum during your period as director of the institution?

Today we are experiencing global transformations at an unprecedented scale. Society is changing rapidly and so are its values, and the youth are taking a leading role here. The climate emergency, the food security crisis, as well as decolonial, social, gender, and Indigenous justice movements, are challenging the western definition of what it is to be human and the place we have in the world.

The exponential growth of information technology is outrunning our capacity to comprehend its impact on our daily lives, leading to an asymmetry between the very few who control and profit from it, and the very many whose data nourishes it and are subject to it. We are in the midst of energy and resources wars, some highly visible, and most are covert.

These transformations are very present in the North, in Sápmi, and place the North and Sápmi at the heart of many of the important debates in the world today. These transformations are constituted by interconnected processes that cannot be understood or resolved individually. We know that culture is entangled with them: in their storytelling, their ethics, sexuality, politics, spiritual reflection, and economy.

Museums today are, like society itself, undergoing an existential re-examination. In this spirit, Nordnorsk Kunstmuseum (NNKM) needs to look deeply at the histories and methodologies embedded in our collections and temporary exhibitions. To acknowledge the established histories they tell, and support the stories they have disempowered by diversifying who has control over them. To help us understand our present and imagine the methods and stories that will define a very different and necessary future. But to do so, we need to challenge ourselves to reformulate how we do what we do, and who we are here for.

At NNKM our number one focus will therefore be to respond meaningfully and sustainably to relevant global and local transformations, aiming to build equity, plurality, care, sustainability, and resilience in everything we do. NNKM is on Indigenous land, and we need to centre this in our thinking and doing.

What/who are you particularly looking forward to working with, and what are your thoughts on the visitors’ expectations?

We are delighted the recent budget proposed extra support for the making of the Sámi Art Museum in the future, and we want to work with Sámi colleagues to be good neighbors for this project. Together there is much that can be done, to advocate for Sámi ways of thinking, being, doing, and seeing in the world. Among them strengthen ways that help society understand the urgent responsibilities of care we all need to take for the lands and waters we are a part of.

The next few years will not be financially bountiful for anyone in the arts given the current economic instabilities, and so we must continue to advocate for the centrality of the arts in a healthy and creative future. However, there are different resources we can mobilize within this scenario. NNKM is relatively free from the all-consuming needs of large buildings; this gives us leeway to think about our model afresh.

This means we can act beyond “bricks and mortar”, operating rhizomatically with the vastness of the North through relationship building that engages plural communities across Finnmark and Troms, Nordland, Svalbard, and across Sápmi.

Furthermore, there is a significant will for weaving alliances among the creative communities and institutions in the North and across the world. This is a powerful resource we need to nourish. We want to work flexibly and with agility, engaging and supporting the richness of artistic practices and thinking here, and advocating for their Nordic and global resonance.

I look forward to working with the team at NNKM and bringing in new colleagues to nurture our initiatives in Longyearbyen, Bodø, and elsewhere. We hope to strengthen existing institutional and community relations and generate new ones. We place our audiences, and especially the youth, at the centre of what we do, to together grow an inspiring program that engages with our changing world.

What exhibitions are on the agenda for 2023, and are you already working on the programming?

We are focused on interconnecting mediation, research, and programming in long-term timelines. So everything I outline now in terms of programming builds in mediation and research to inform and activate it, which in turn means we are working with colleagues and citizens from across the North, and Sápmi, to do so.

We are examining our collection closely, as there is much work to be done on the important stories of the North, and Sápmi, that the many wonderful works in it tell. However, like most museum collections, there are also important imbalances in it that reflect the different values of the past. The collection is approximately 70% men, 28% women, and 6% of them are Sámi, and it doesn’t as yet encompass the creative dynamism that diasporic communities have brought to the North, which we highly appreciate.

I hope the Norwegian government will not push through the cuts to international students, which will be disastrous for the art academies and cultural life here.

So, we have a task ahead to repair these imbalances and heal some of the ruptures they have created, while continuing to deepen the world's understanding of northern perspectives over time.

We are assessing how the collection reflects the needs of society today, and how it can inspire future imaginaries and actions. We will implement this thinking in our acquisitions and exhibitions, as well as in collection displays, research, mediation, and community-led collaborative processes. Hence, in the spring we open the first of a series of collection displays in which some of the above take form.

In 2023 I look forward to presenting the first solo exhibition in Europe of Pulitzer-awarded artist and musician Raven Chacón. Chacón is Navajo Diné and has visited Sápmi on a few occasions over the last years where he has many friends. His installations and performances are inspired by his experience of colonialism, and his relations to land, from the residential school experience to Standing Rock. All of which will resonate with similar experiences in Sápmi and are a part of the stories of global Indigenous interconnectivity we wish to tell moving forward. We hope the project will also come to life in different parts of Sápmi and the North, and beyond.

We embark on two long-term commitments in Svalbard in 2023: as key partners for the new arts centre in Longyearbyen, Nordover, where we will be presenting exhibitions from its launch this November; and in Artica Svalbard´s artist residencies. Our concern is to develop projects that are mindful of our Carbon-footprint, of the complex geopolitical reality of Svalbard, and focus on the diversity of local communities.

Next year we will also strengthen our relations with the arts in Bodø through various mediation and artistic projects, in the build-up towards a new filial there.

And we will collaborate with partners Pikene på Broen in Kirkenes and with others in the regions. All of the above is conceived in tandem with long-term mediation and research processes across the North and Sápmi. In parallel to all this, we will be building international collaborations circumpolar and beyond in museological research and exhibition projects.

All of this is guided by our belief that only when one is deeply and locally embedded does one find impactful global resonance.

NOTE 1: Initiated and developed by OCA and the Northern Norway Art Museum (NNKM). It brought together figures from the fields of art, architecture, psychology, philosophy, history, and science, who was invited to visit and think about the region, considering it as a unique vantage point from which to reﬂect upon the environmental, aesthetic, architectural, economic, political and scientiﬁc forces that are shaping the North of Norway and its relationship to the world. 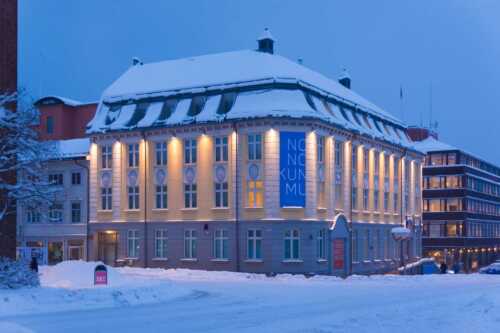